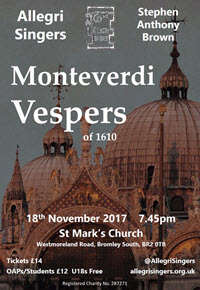 We began our 2017/18 season with a performance in our home venue (St Marks, Bromley) of Monteverdi’s Vespers. This seminal work from 1610 was performed with original instruments, fittingly in the 450th year of Monteverdi’s birth. 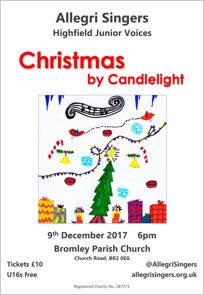 We were joined by the marvellous Highfield Junior Voices for a candle-lit concert in Bromley Parish Church.

There were carol arrangements sung by the choir, interspersed with items sung by the children. Also some favourite carols for the audience too and mince pies and mulled wine to warm the spirits on a chilly night! 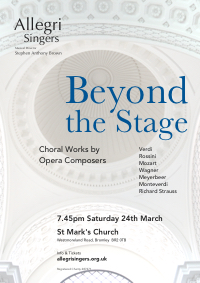 The concert concluded with Richard Wagner’s highly expressive arrangement of Stabat Mater by Giovanni Pierluigi da Palestrina, with soloists from the choir. 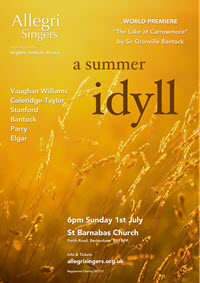 We had a wonderful evening, singing summer treats, both well known and new, and were particularly proud to present the World Première of “The Lake at Carrowmore” by Sir Granville Bantock.

A rehearsal recording of ‘The Lake at Carrowmore’

An introduction to the programme