We began our 2018/19 season with an Allegri “first” – performing an overlapping double bill programme on consecutive days over a weekend. 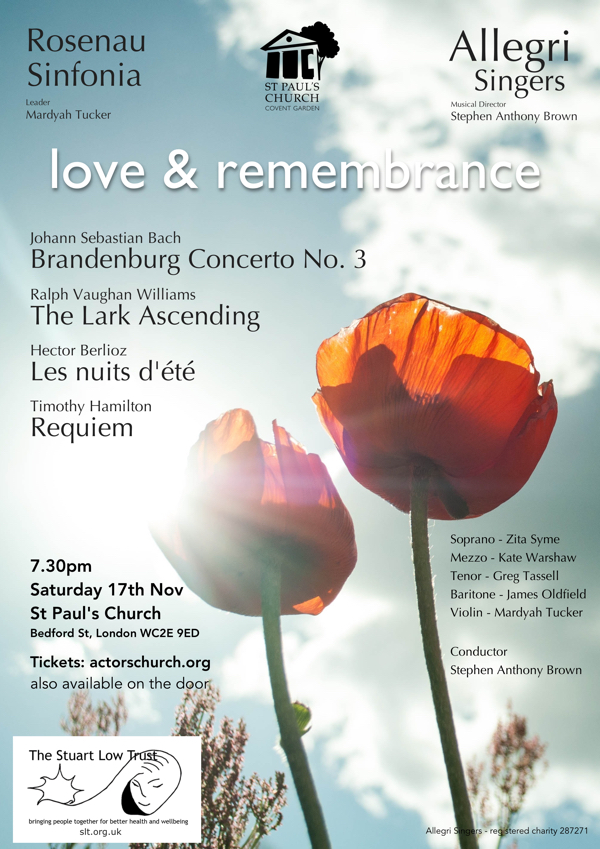 Part one of a collaboration between the Rosenau Sinfonia and The Allegri Singers  brought a wonderful programme of JS Bach’s ‘Brandenburg Concerto No. 3’, Vaughan Williams ‘The Lark Ascending’, Berlioz ‘Les nuits d’été’ and an exciting new work by Timothy Hamilton – his “Requiem”. The Requiem was commissioned to commemorate the 100th anniversary of the First World War and we are delighted to be among the first amateur choirs performing it.

The concert was given in aid of the Stuart Low Trust, an Islington based charity whose mission is to ensure that local people, especially those experiencing social isolation or mental distress, have access to the support they need for better health and wellbeing. 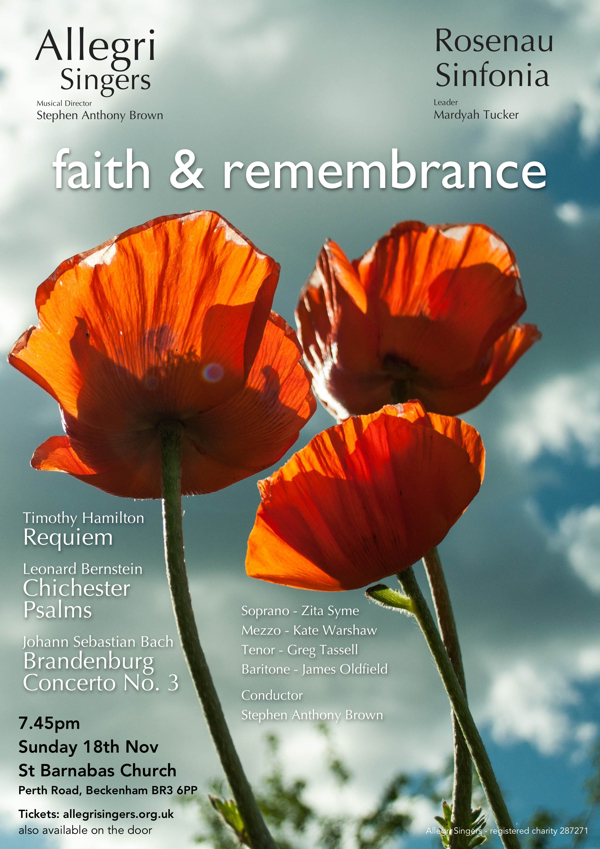 Part two of our collaboration with the Rosenau Sinfonia was a dramatic and beautiful programme featuring JS Bach’s ‘Brandenburg Concerto No. 3’, Leonard Bernstein’s ‘Chichester Psalms’ and Timothy Hamilton’s ‘Requiem’. The Requiem was recently recorded by Cantoribus and the Rosenau Sinfonia and released to critical acclaim on Naxos records. The CD is available to buy at amazon.co.uk 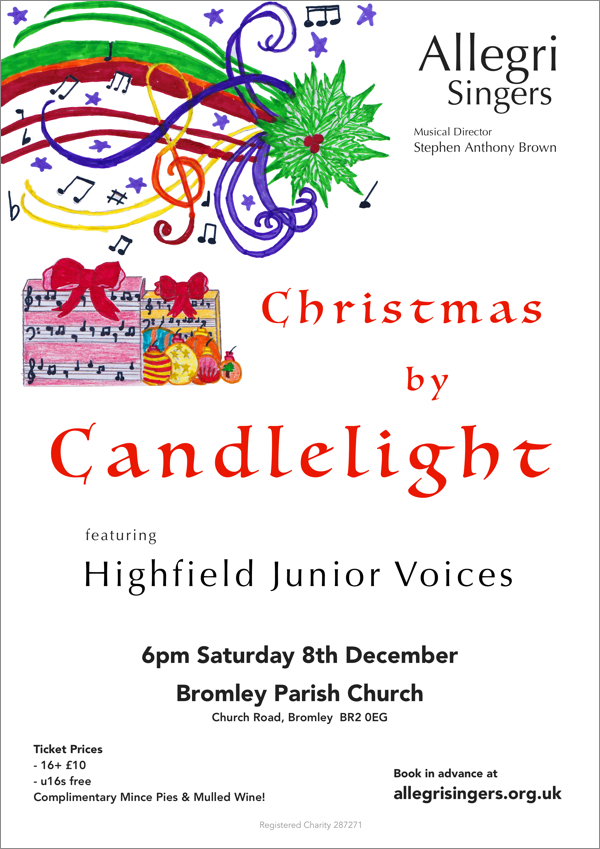 We were  joined by the marvellous Highfield Junior Voices for a candle-lit concert in Bromley Parish Church. 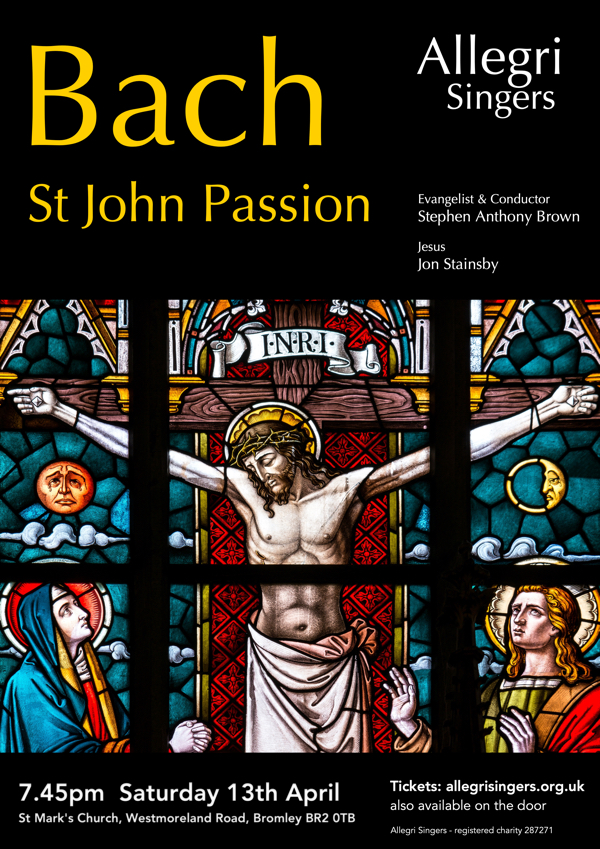 Performed in the original German with a small orchestra of players from the Brandenburg Sinfonia at St Mark’s Church, the Allegri Singers were conducted by Stephen Anthony Brown, who also sang the part of the Evangelist. The part of Jesus was sung by baritone Jon Stainsby. We were also delighted to welcome soprano Chloe Morgan, mezzo Cathy Bell and tenor Gareth Edmunds. Other solo parts were sung by members of the choir. 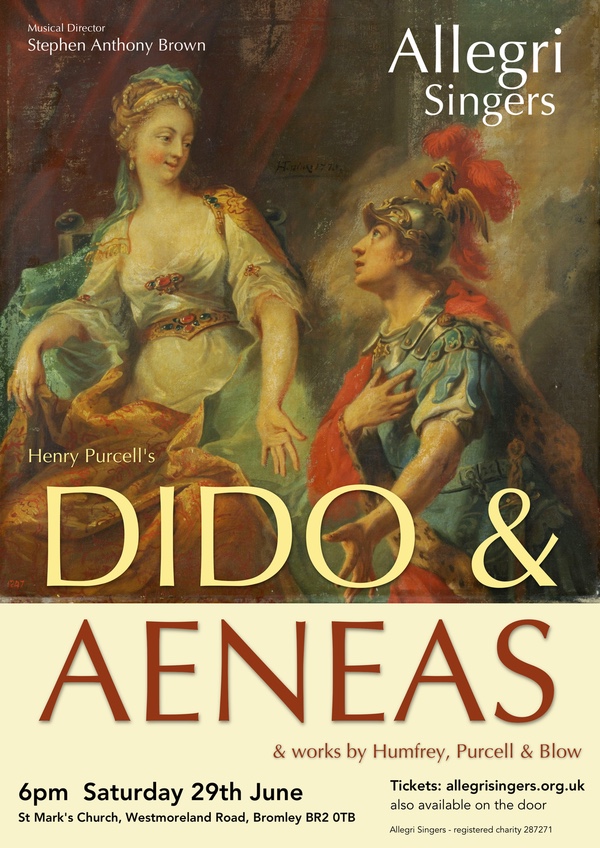 We gave an early evening concert performance of Henry Purcell’s famous opera in three acts, preceded by John Blow’s “God Spake Sometime in Visions”, “Rejoice in the Lord Alway” by Purcell and Pelham Humfrey’s “Lift up your heads”.