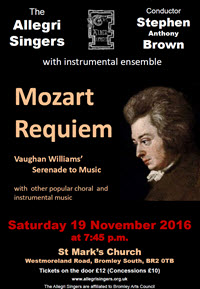 We started our season under our new conductor Stephen Brown at our usual venue, St Mark’s Church, Westmoreland Road, Bromley BR2 0TB with a concert featuring a performance of Mozart’s ever-popular Requiem with professional soloists and instrumental accompaniment, and including three pieces by Timothy Hamilton which are well worth getting to know, together with Vaughan Williams’ delightful Serenade to Music and a Mozart Divertimento performed by the players.

Accompanied by James Orford, piano, and members of the Rosenau Sinfonia

*These works were performed in the presence of the composer, who has placed a video recording of The Evening Hymn (Te lucis ante omnium) on YouTube.

Played by members of the Rosenau Sinfonia

The Allegri Singers are dedicating this performance to the memory of Michael Sherwin. See below.

Accompanied by James Orford, organ, and the Rosenau Sinfonia

It is with the greatest sadness that the Allegri Singers have received the news that Michael Sherwin, long-time bass singer in the choir and serving us for the past seven years as our Treasurer, has passed away following a long struggle with throat cancer, a particularly cruel form of cancer for a singer. Michael was a fine musician, highly knowledgeable of a vast range of music, a true stalwart of the bass department, but also able to take the baton for rehearsals in the event of emergencies such as last-minute travel problems for our regular conductor, and it would be hard to find a more alert and sensitive conductor, always able to give an encouraging nod in the right direction at the right moment. He was also well-known in the Bromley area for organising high-quality choral performances at St Mary’s Church, College Road, where again his talents at getting the best out of his choir were always apparent. A kind, patient but firm leader, Michael was one of the loveliest people you could meet. He will be sorely missed. Our deepest condolences go to his wife Sarah and his children.

The Allegri Singers and the Highfield Junior Voices gave a candle-lit concert in Bromley Parish Church on December 10th.

The choir performed carol arrangements, interspersed with items sung by the children. There were also some favourite carols for the audience too, and strong participation from the audience! 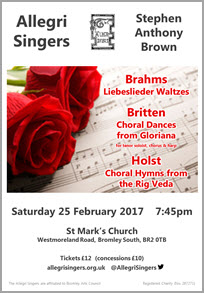 A delightful evening at our home venue, St. Mark’s, Westmoreland Road, Bromley BR2 0TB where we performed a concert centred around Holst’s Rig Veda, with harp accompaniment, and those lilting Liebeslieder-Walzer (‘Love song waltzes’) by Johannes Brahms, with piano four hand accompaniment. The Holst item was for upper voices only, so the men took their turn with Britten’s Ballad of Little Musgrave and Lady Barnard, while the full choir performed Britten’s Choral Dances from Gloriana.

Holst: Hymns from the ‘Rig Veda’

Performed by the ladies of the choir, accompanied by Bethan Semmens, harp

Britten: The Ballad of Little Musgrave and Lady Barnard

Performed by the gentlemen of the choir, accompanied by Paul Jeanes, piano

With Greg Tassell, tenor, and accompanied by Bethan Semmens, harp 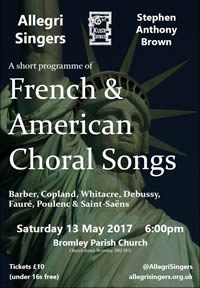 This short concert consisted of around one hour of music, including Barber’s well-known Adagio, Fauré’s Cantique de Jean Racine, a selection of Copland’s Old American Songs, together with part-songs by Barber, Whitacre, Debussy, Poulenc and Saint-Saëns. 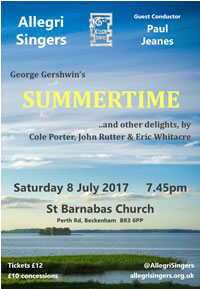 Our summer concert was held at the delightful St Barnabas Church, Beckenham BR3 6PP, and featured a light programme including, of course, George Gershwin’s Summertime, John Rutter’s Birthday Madrigals, works by Eric Whitacre, and choral arrangements of some popular songs.