The Allegri Singers are a small chamber choir based in the Bromley area, with all ages of singers, performing an adventurous repertoire to the highest standard. Our conductor is Stephen Anthony Brown.

We would be delighted to receive applications from experienced choral singers with good sight reading ability.  More information on how to apply is available here.

The choir currently promotes four concerts each year. In addition to these, the Allegri Singers are pleased to accept a number of invitations to perform at corporate or private functions and at commemorative services in return for a contribution to choir funds. From time to time, we also sing weekend services at a British cathedral.

The Allegri Singers were founded in 1981 by Paul Stevens with the aim of performing a wide variety of choral music to the highest standard, specialising particularly in twentieth century repertoire. 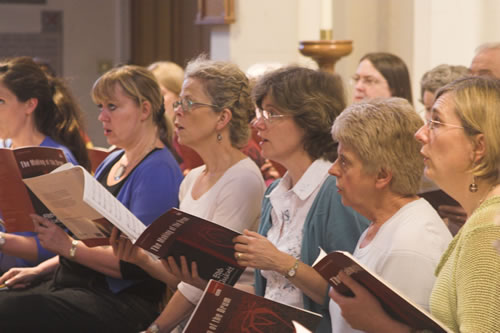 All eyes on the conductor

The choir has had a series of distinguished conductors, including Dr Michael Nicholas, former Organist and Master of Choristers at Norwich Cathedral, the world renowned tenor Andrew Kennedy and Keith Roberts – a counter-tenor, conductor, composer and arranger. More recently, Tom Bullard (a former Swingle singer) spent seven successful years at the helm from 2008 to 2015, followed by Jamie W Hall, who was unfortunately only able to be with us for a year. Jamie was succeeded in September 2016 by Stephen Anthony Brown.

Although originally specialising in contemporary music, the choir has expanded its repertoire over the years to include the whole spectrum of choral music, from early polyphony to modern jazz. We pride ourselves on our ability to perform a wide range of musical styles, with energy and panache.

The Allegri Singers are a registered charity (no. 287271) and are affiliated to ‘Making Music‘ (formerly the National Federation of Music Societies) and Bromley Arts Council.