Tom took over the baton from Keith Roberts in September 2008. 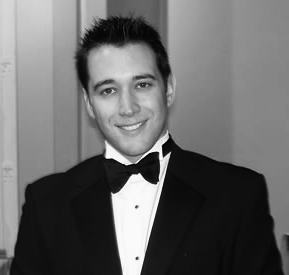 Tom Bullard came to the Allegri Singers in 2008 after working for seven years in the Swingle Singers, the last four as Musical Director. Under his direction the group toured through Europe, the USA, Asia, South America and New Zealand, performing in venues such as the Theatre du Chatelet in Paris, the Terme di Caracalla in Rome, the Philharmonic Hall in St Petersburg and the Royal Albert Hall.

He spearheaded the group’s work with some of the world’s finest orchestras and conductors, including recent and current collaborations with Maggio Musicale, Florence, and the Vienna Philharmonic, both conducted by Zubin Mehta, the Orquesta Nacional de España under Josep Pons, and the Royal Liverpool Philharmonic Orchestra under Carl Davis. He worked very closely with Antonio Pappano, preparing performances of Berio’s Sinfonia with the Accademia di Santa Cecilia for the BBC Proms 2007 and the opening of the orchestra’s 07-08 season in Rome, and he coached the group through the world premiere of Azio Corghi’s new opera, PIA, at the Teatro dell’Opera in Rome. His own arrangements have been recorded on a number of the group’s albums, published under the group’s own label, and have proved popular with choirs and ensembles worldwide, leading to a Contemporary A-Cappella Recording Award (Best Jazz Song – The Lady is a Tramp).

Before joining the Swingle Singers, Tom sang for three years with the Choir of King’s College, Cambridge, where he read Music, making a number of solo appearances in broadcasts and recordings with King’s College Choir. At Cambridge he spent a great deal of time in orchestras, both as bassoonist and conductor, As a somewhat lapsed bassoonist, he has still been much in demand in orchestras and recital appearances. He has made his mark as a matinee idol, in shows such as Guys and Dolls, Sweeney Todd, Bouncers (which he also directed), Grease, and Camelot. He has also made a few television appearances over the years, in programmes as diverse as Carols from King’s and Barrymore!

Tom was succeeded by Jamie W. Hall in September 2015.